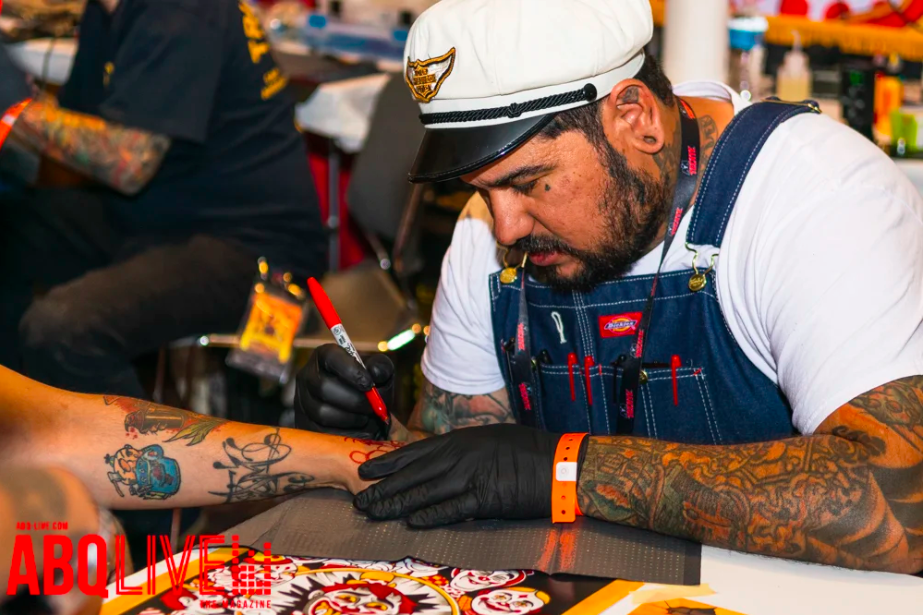 Isleta Resort & Casino, New Mexico –  The halls of the New Mexico Tattoo Fiesta were abuzz with excitement. Bare-skinned patrons walked into New Mexico’s largest gathering of tattoo artists like a fresh ivory canvas walking into an art studio. In stark contrast, alongside the starry-eyed newcomers were tattoo fanatic veterans. Full jet black sleeve designs that could have only come from hours of dedicated tattoo artistry marked these body-art collectors. Married couples looking to make another life-long commitment, tourists wanting a special kind of souvenir, friends making memories, and many more gathered for Albuquerque’s annual tattoo festival.

The New Mexico Tattoo Fiesta returned to Albuquerque July 12th through the 14th and continued on it’s mission to bring together artists from all over the country and world. The rooms of Isleta Resort and Casino were packed wall-to-wall with tattoo artists of seemingly every style. Traditional Japanese style koi fish, classic American pin-ups, geometric mandalas, and so much more. It was a Las Vegas-style buffet of designs for guests of the Fiesta, and while choosing a tattoo artist in the heat of the moment sounds rash, visitors of the event went in with level heads.

“I’m not scared to get a tattoo, but I want to find an artist who can give me what I want,” said one young lady looking to add to her tattoo collection.

“We knew we wanted to get matching tattoos, but we didn’t know from who or what we wanted. Eventually, we decided on these (Jack Skellington and Sally tattoos),” said a couple who had just gotten off the chair.

While tattoos used to indicate a careless or impulsive character a couple of years ago, that archetype no longer applies to today’s ink carriers. According to a recent poll by the Pew Research Center, about half of Millennials have reported having one tattoo, as well as a third of Gen X-ers. Tattoo shops that for so long buzzed their neon signs in any dark alley that will have them are spotlighted in nearly every major city today.

“When I was younger it wasn’t even a real profession how it is now. I didn’t know anyone who was doing it for a living,” said Brandon Quinn of Dark Horse Tattoo Co.

The rise in tattoo apprenticeships and the number of artists getting involved in the community are a great sign of progression here in the United States. However, the world might not be ready to let every tattoo artist’s ink run loose. Los Angeles based shop, Black Diamond Tattoo, hosts South Korean tattoo artists who have no choice but to work on their craft outside of their country.

“In South Korea, it is illegal to give tattoos. So we fly these artists out here and let them work their craft with us.” said the Black Diamond Tattoo translator.

According to Black Diamond Tattoo because tattooing is outlawed in South Korea there is more of a focus on individual style. In the US, popular designs are more likely to appear such as roses, or butterflies, but because of the ban on tattoos, trends never get the chance to start. The artists are much more focused on their own style, which is one aspect of the ban they enjoy. There is a closer bond to the community for artists who participate in tattooing. Those who would normally be seen as competitors in South Korea are kindred spirits who actively chase the same dream.

New Mexico Tattoo Fiesta 2019 prides itself on selecting the best artists from across the country in order to provide a wide selection of artists while also in order to grow the tattoo community. With new artists being invited every year, the Tattoo Fiesta is an art gallery unlike any other.