You are here: Home / Archives for props

Imagine Thor without a hammer, Cast Away without Wilson the volleyball, or Back to the Future without a Delorean. These are only a few examples of movie props that have played essential roles in their films. Photo courtesy of Joshua Aragon – Actor Michale Shannon is propped by Aragon in preparation for a scene.

Acquiring props for a production is possibly one of the most important jobs in the film industry. The coordinators behind each material detail on set are known as property masters, or prop masters for short.

Joshua Aragon is a local prop master who was has been in the entertainment business since he was 5 years old. “I am in charge of everything an actor touches, picks up or eats,” he said. “I maintain all props on set with the actors.”

A scene cannot be shot without props. It is important to recognize that every aspect of a movie is carefully choreographed and planned. The presentation that audience members interpret is crafted down to the tiniest detail. This could be a bag of chips sitting on a counter in the background or a phone hanging on the wall.

Audiences don’t typically pay attention to every single object in each scene, but it’s important to note that no object is naturally occurring. Everything we see has been placed by prop masters like Aragon.

He has a script he follows, just like actors do. He thoroughly studies each of his scenes and manages all of the props for those scenes for the duration of the film.

Aragon has worked on several sets for major motion pictures like Sicario and Maze Runner: The Scorch Trials. His involvement in such well-known productions has allowed him to interact with countless successful showbiz members. Photo courtesy of Joshua Aragon – Chris Hemsworth discusses a scene with Aragon on the set of Horse Soldiers.

“I have been blessed to work with some of the biggest names in the industry,” he said. Denzel Washington, Jennifer Aniston, Chris Hemsworth, Mark Wahlberg and Jerry Bruckheimer are among hundreds of notable entertainers that Aragon has met while on the job. Although Albuquerque is his home, Aragon’s favorite perk to managing props is traveling. Movies are rarely filmed in one place, so he gets to see the country while also befriending his childhood idols.

Aragon gives back to his Albuquerque community through his contribution to the film industry. “New Mexico benefits from film tremendously. We are constantly buying, renting and building props locally,” he said. His last film had a $600,000 budget for props, and 90% of those funds went to local businesses here in New Mexico.

We don’t often think about the importance of props because they are abundantly present in every film. However, movies cannot be made without them.

Aragon is currently working on his 30th major motion picture. He explained that his job is not easy, but the people he works with make it enjoyable. “My experiences have been amazing,” he said. “I love how we’re all family.” 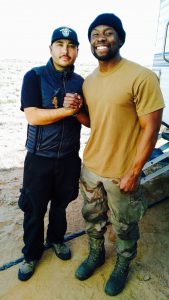 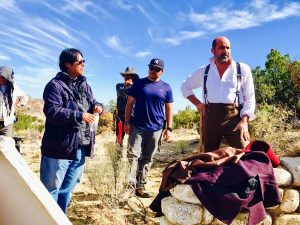 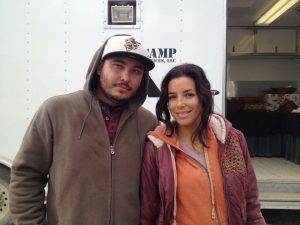 Aragon with Eva Longoria on the set of Frontera. 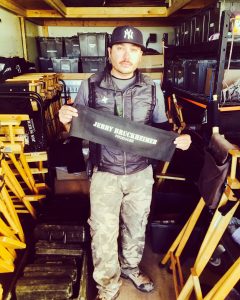