You are here: Home / Archives for University of New Mexico

When University of New Mexico (UNM) senior student Ava Yelton was alerted about the 2.6 percent tuition increase for the 2020-2021 academic year, she immediately took action.

Yelton launched a petition on June 30, pleading that hybrid and remote learning does not provide the same productivity level that in-person classes offer. She argued many students do not have access to technology and additional resources needed for this transition. With student resources at an all-time low, Yelton’s petition asks for tuition to be lowered to help students with the transition.

“The overall message generally is that it is unethical to charge students more, let alone the same price during a global pandemic,” Yelton said. “People are so unsure of their current situations, and it’s just not right that they would have to put their education on hold because our representatives refuse to help us.”

At the time of this article, Yelton’s petition has received an overwhelming amount of support, gathering 5,453 signatures edging closer to her goal of 7,000.

Following her petition release, the university branch for Students for Socialism launched its first protest on August 13. Their Facebook Event echoed Yelton’s words, adding that, with courses being taught online instead of in-person, students will be paying more for an inferior experience.

The call for students to come together did not go unanswered. Several students arrived at the first protest brandishing signs that echoed the outrage in Yelton’s petition.  At the event, students gathered at the 7,000 square-foot University House of UNM President Garnett S. Stokes. They took turns letting each other speak as they held signs asking for lowered tuition rates.

Many students exclaimed that they had to drop out of the semester due to the tuition increase siting unemployment as a high factor in their decision to halt their education. While many current and former students voiced their outrage others pleaded with attendees to focus on coming together peacefully to confront the tuition increase.

One former UNM student and member of the Party for Socialism and Liberation Sol Dean pleaded with students to relate with each other as they stand together to protest. In addition, he asked students to seek to understand people who disagree with them.

“I think that it is important that we understand that if we are not essential to our country that we need to be essential to each other,” Dean said.

In addition to highlighting the current concerns with having the 2020-2021 year’s tuition increase, the Students for Socialism argued that tuition increases have been ongoing even before COVID-19. They stated that from 2008 to 2018, the average tuition at four-year public colleges has continuously increased in all 50 states.

Yelton said the goal of those who stand with her is to get tuition lowered for students for the current academic semester. Long term, Yelton said she hopes that students can see a change in how the education system handles higher education establishing fair and affordable tuition prices for students by standing together.

We believe that education is a human right,” Yelton said.

Future protests are currently being scheduled, and Yelton said she feels she owes it to her fellow students to continue standing with them since she started the initiative.

“I want my fellow students to know that they are heard, and they are not alone in their struggle,” Yelton said. “Their voices do matter. I’m just a single person that started a petition, and it has come this far. When students care enough to voice their opinion about something, it can start change, and that’s something students should remember, that they do have a say even if it feels like they don’t.”

Check out the full photo gallery from the UNM vs NMSU Tailgate on Saturday September 21st, 2019. The annual Tailgate party goes on outside the Dreamstyle Stadium.

END_OF_DOCUMENT_TOKEN_TO_BE_REPLACED

When it comes to dedication, Executive Women International (EWI) has proven time and time again that they are ready to rise above any challenge to achieve their goal no matter how long it takes. Their goal? Bringing women from diverse backgrounds together, helping them enhance personal and professional development in the business world while encouraging community involvement. The organization has been pursuing this goal since 1978.

Holly Norton with the EWI Albuquerque Chapter said from promoting member firms, to providing personal and professional development of women they help, her chapter works hard to ensure the success of their mission statement. .

“This is an organization that created a space for women to realize their executive potential and their potential in the business world,” Norton said.

Futhermore, the EWI Albuquerque Chapter also works hard to give back to their community through philanthropic ventures. Of the philanthropic ventures, they focus strongly on promoting literacy among the youth of New Mexico. The EWI Albuquerque Chapter achieves this goal through their Annual Reading Rally, a time when local celebrities read to the children of the community. This year’s rally hosted UNM Lobo Baseball players to read to second graders. In addition to the event, Norton said her chapter donated school supplies and books to the second graders of Hodgin Elementary.

As for their future, the EWI Albuquerque Chapter hopes to strengthen the women of their community as they reach women of all age demographics while helping them realize the value they can receive through EWI.

“This group created a platform for women to grow and to realize that they had more potential than they ever knew they had and I think that’s one of the things that makes us continue to go on,” Norton said.

UNM Catering is your one-stop shop for all of your special event needs. Our culinary team is creative and passionate about delivering a menu that fits your unique tastes and budget, leaving your guests with a delicious, memorable experience. Choose from carefully curated menus ranging from impressive displays to show-stopping plated dinners. UNM Catering is also happy to team up with you for a personalized consultation to create a one-of-a-kind menu, enhancing your vision of the special occasion.

Take advantage of the many venue options on campus, or have UNM Catering visit you offsite at your home, office or event space. UNM has many rentable spaces including private meeting rooms or beautiful ballrooms in the Student Union Building. Venture across campus to reserve more intimate spaces such as the University Club, or experience the beautiful city views from the pavilion at UNM Championship Golf Course. Onsite or offsite, we are pleased to bring the flavors to you.

No event is too big or small. We offer comprehensive options for intimate meetings and gathering to large scale banquets and everything in between. Try our fresh take on boxed lunch options for your next meeting, or stay on trend with an artisanal toast bar for a conversation starter at breakfast. Our goal with every event is to deliver a catering experience that goes beyond the traditional expectation. No matter the event size, our main ingredient is care for all of our valued clients.

Creative culinary is our specialty and we’ve got you covered from antipasto to ziti. Our chefs have incredible range and flexibility. Dietary restrictions, cultural cuisine or themed meals are welcome to help you design the perfect meal to compliment the occasion. We pride ourselves on offering an incredible value to our clients. Count on professional, polished presentations and bundled items that maximize your budget.

We have a service that you can count on. Our experienced staff is attentive and proactive about making sure you and your guests can relax and enjoy the event. You choose the service style and our team will gladly assist in delivering a guest experience that makes the host the toast of the event. Our clients can rest easy knowing that UNM Catering will go above and beyond to deliver a ‘wow’ experience. Confidently add bar service with our experienced servers and bartenders.

Contact us today to plan your next event! Visit our website to view our menus or place your order. Our sales staff may be reached at 505.277.2506 or stop by our office in the Student Union Building at UNM.

Con-Jikon returned to the Ramada hotel in Midtown on Nov. 17-18 to once again help Albuquerque dive into the creative world of anime and gaming.

The anime and gaming convention was created by students from the University of New Mexico in 2013. This year marked the sixth convention for the event. On top of engaging with fans of the anime and gaming community Con-Jikan strove to inspire attendees with its programs. The convention kicked off with an free day that took place Nov. 16 before the regularly scheduled convention giving attendees a free taste of what they could look forward to for their weekend.

Featuring an array of guests including the voice talents of Michele Knotz and James Carter Cathcart the convention promised a day of fun for attendees. Cosplayer’s flooded the halls of the convention as they showcased an array of characters from their favorite video games and animes. In a special treat cosplayers even received the opportunity to compete with each other during Con-Jikon’s Masquerade on Nov. 17 where both novices and professionals pitted there talents against each other in front of a panel of judges. Contestants let there creativity unleash as they not only showcased their outfits but performed choreographed dances or acts. Some winners included a dark comedy routine by a Michael Myers and Jason cosplay from their respective horror movies and video games as well as a Holo and Kraft Lawrence cosplay from the anime Spice and Wolf who splendidly performed to the song The Fox by Ylvis.

Those interested in competing in games were not left disappointed either as interested individuals were given the chance to participate in a Super Smash Bros tournament and Fortnite tournament in which they were able to play against other competitive attendees.

Competitions were not the only thing that attendees were able to look forward to however as an array of panels were also available including one titled “Original Character and Comic Museum” that tackled the origins of many of popular fictional heroes who began as original characters including the likes of Marvel’s Deadpool and Detective Comic’s  Harley Quinn.

Outside of the panels and competitions attendees of the event were able to enjoy merchandise from multiple local and nonlocal businesses. Many of the merchandise matched the theme of the convention and included prints of famous gaming and anime characters as well as hair pins and accessories.

Con-Jikon ended with closing ceremonies on Nov.18 with the conventions official twitter page posting a picture of another one of the activities it had made available to attendees, a drawing board which allowed participants to draw freely on sheets of white paper posted. At the end of day two the board was filled with the art of several attendees.

“Here’s our drawings board at the end of Day 2. Again we would like to thank all of the artist who decided to contribute to the image board. With that we will see you again next year,” Con-Jikon tweeted to both new fans of the convention and old. 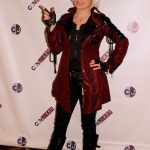 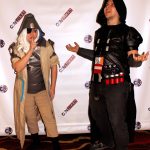 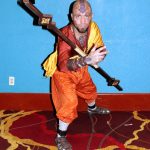 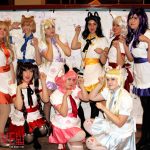 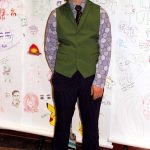 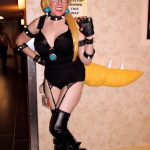 Nob Hill Bar and Grill and Dj Ian Evan set the stage for an awesome night in Nob Hill with Halloween costumes, beats and drinks! END_OF_DOCUMENT_TOKEN_TO_BE_REPLACED

Dj Ian Evan is throwing down Friday nights at Nob Hill Bar and Grill for his Upscale Friday Nights. Be there this Friday 10.26.18 for an upscale night in Nob Hill.