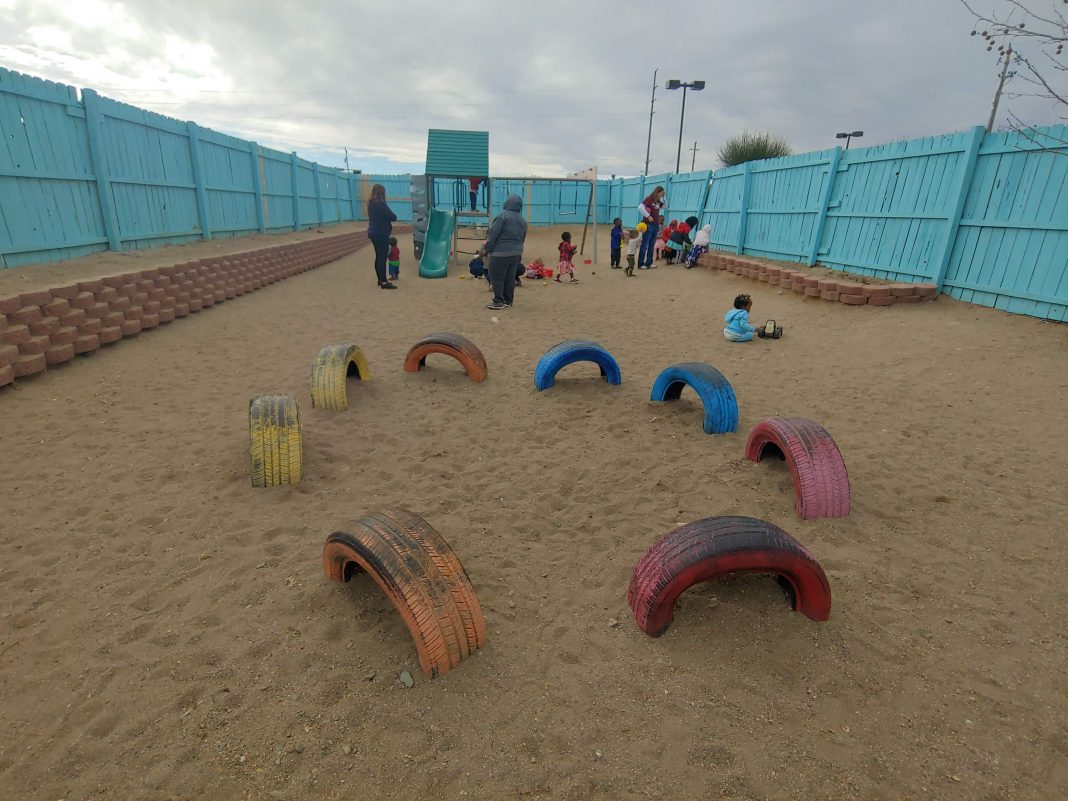 Albuquerque locals are coming together to change the lives of the city’s most impressionable youth. Kingdom Builders Daycare is located in the International District, in Albuquerque’s Southeast side of town. Over the years it has had severe damage to their fences surrounding the playground. Local members of the community have risen up, hoping to change the conditions for children of the daycare.

Partnering with Last Ditch Effort’s owner, Alec “Cam” Fergeson, the management of Kingdom Builders Daycare is working hard to build a better environment for their children. This spring, the daycare will be adding several music classes, gardening, a nutrition program, and a pottery course to the existing daycare curriculum. The final addition to the project will be a brand new playground for all the children to enjoy!

James Landry of Kingdom Builders Daycare said the goal is to not only improve the daycare playground but also enrich the curriculum for their students. Many of the children who attend the daycare are CYFD funded, Landry said, pulling from many cultural backgrounds, including the African refugee community that is growing in Albuquerque. Kingdom Builders Daycare is one of the only daycares that has hired Swahili speakers to help communicate with the new students.

“We have this amazing eclectic group of kids that are being raised together,” Landry said. “We have this opportunity to work with these kids at the youngest level to break some of the cycles of poverty, of the drug abuse and physical abuse that are rampant in this neighborhood.”

Landry hopes to improve local Albuquerque children’s lives and also bring the children of refugees into a positive environment by improving the conditions for the children at the daycare. They wish to honor their culture while introducing them to Albuquerque’s own.

Pastor Pete Myers will be joining the project, spearheading a free music program to enrich the environment further for the children.

“We’re trying to recognize the needs the community has and the kids have and adapt our program to make sure we’re meeting the needs of the families,” Myers said.

The gardening program, Myers said, will help show the children the importance of nutritional value and agriculture, while letting them interact in a fun, safe environment. Alongside this program, Myers hopes the music program will help to improve the lives of the children in the long run, as schools with music programs have a higher graduation rate regardless of income, he said.

“The truth is a lot of the families in this neighborhood do not have the money for what it costs for quality music education—they don’t have the money to buy instruments to even teach themselves to play,” Myers said. “So that is something that we have the people around who are gifted in those areas that can help. Our hope is to use those people, and make connections in the community, to make this program even bigger and better.”

In addition to helping the children through this program, Myers said Kingdom Builders Daycare has also reached out to the adults within the community by hiring them to work at the daycare while pursuing a degree. Myers said this way they can invest in their own future, becoming an example for the youth they are surrounded by.

Myers said it’s fulfilling to see lives change and lives turn around; he hopes to see people’s situations improve by first not being in need and then being able to help others in need.

Landry agreed with Myers, explaining many of the adults within the community they hired do not always have the mindset or innate hope, drive, or belief in themselves. Landry said by helping both children and adults grow they are teaching their staff their work is more than just a job, but a mission as well.

“They’re starting to see that their investment in the community actually pays back in dividends,” Landry said. “We get to see these adults developing and the children developing at the same time.”

Fergeson said his company is honored to be a part of the ongoing effort to improve Kingdom Builders Daycare. When he was first shown the playground, Fergeson said he was sad it was surrounded by a bullet-riddled fence. After seeing that he became determined to make the daycare a beacon of hope.

“My biggest thing is being the change they want to see,” Fergeson said. “If you don’t like something, do something to change it. You can’t just sit there and complain about it and expect things to change. You have to get out there and do it. And I think starting with this program is beautiful

He said this is a long-term project starting with the younger generation and molding them into positive, productive members of society.

The work has just begun, but Fergeson, Landry, and Myers are looking to the future, determined to make a positive change on the community. This includes, according to Fergeson, changing how the area they’re working in is referred to. Fergeson believes that continuing to refer to the International District as the “War Zone” only continues to perpetuate the stigma and the mindset of the people who live there. Fergeson said changing the way the district is viewed, along with impacting the area with positive change, he hopes to see a brighter future for the district.

“I can’t prevent crime. I’m not a superhero; however, I think by doing the things we’re discussing now would be a big deterrent,” he said. “I think by creating and instilling a sense of pride in this beautiful place is just going to change the culture and community around it.”

For more information on the continuing effort here