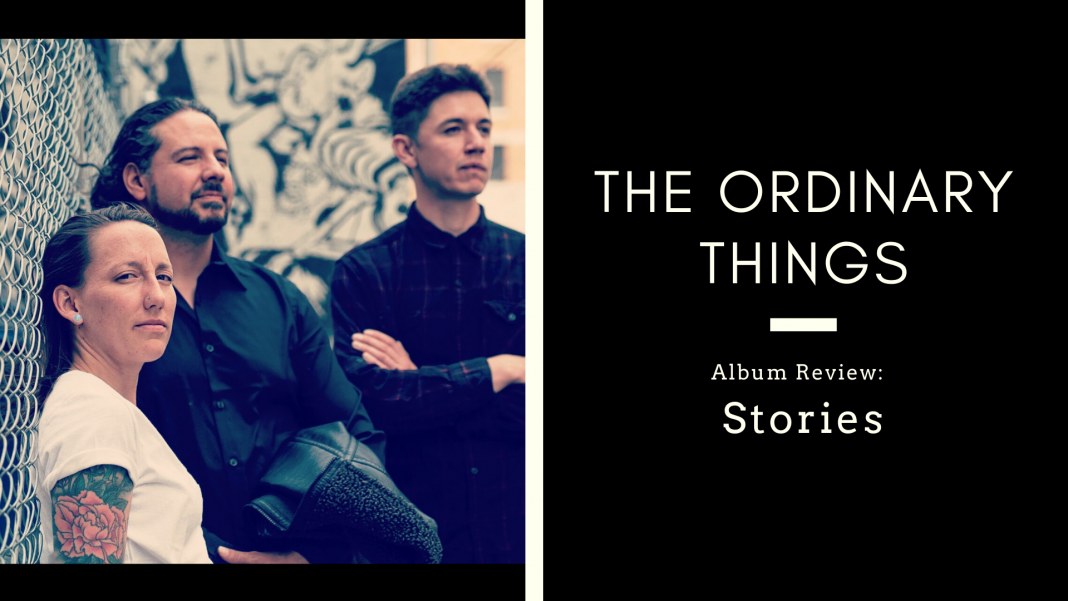 Debut album Stories from indie rock trio The Ordinary Things is a finessed force, vast like the multiplicity of water.

Listening to Stories is similar to watching light refract like ice over a window, warped sparkles mesmerizing in the particular ways of delicacy. The stark song arrangements serve as a reminder that at its core, music is meant to arouse emotion through a sonic-rocket-ship-story. Jacqueline Chacon on drums and lead vocals is the cascading energy that moves Stories like waves. Justin McLaughlin slays on bass and vocals, and, almost mercifully, lays down the soul-satisfaction that only a synth can provide. Guitarist Andrew Chacon facilitates the inherent tension of the album with buoyancy and grace.

With their debut album, The Ordinary Things master subtlety, tender in their particular elicitations. Listening to the album Stories feels like brushing into someone standing near a show because of uncontrollable music-induced movement. At that moment, an electric current runs through the contact, elevating the experience. This sort of layered emotional treasure is exhibited in the track “Supposed To,” where the rhythm of guitar, bass, and vocals coincide with the intensity of an army marching in step.

The title track “Stories” ascends in a 90s-indie-rock mist. Chacon croons with Ramone’s vocal inflections. She twists vowels and adds consonants, effectively enticing the listener to join her in her own singing excursion. Through such nuances, she strikes with the rock-star balance of nerve and nonchalance.

With a sudden tumultuous display of punk rock is the “American Dream.” The chorus, “On your knees for the American dream,” is an obnoxious sentiment that works because it alleviates some of the friction that is tacit in indie rock. Heavy downbeats count as fighting for autonomy. Similarly, in “I Am the Space,” Jacqueline Chacon sings, “my body is infinite,” a song for nobody but one’s self. McLauchlin’s synths blare like trumpets during the chorus in the act of resilience.

In conclusion, Stories is an ocean tide, an exhibition of the forms of water. Like music, like water, we are malleable; Stories takes advantage of that. Memorable riffs and jarring lyrics carry the listener, epitomizing the transcendence of music.