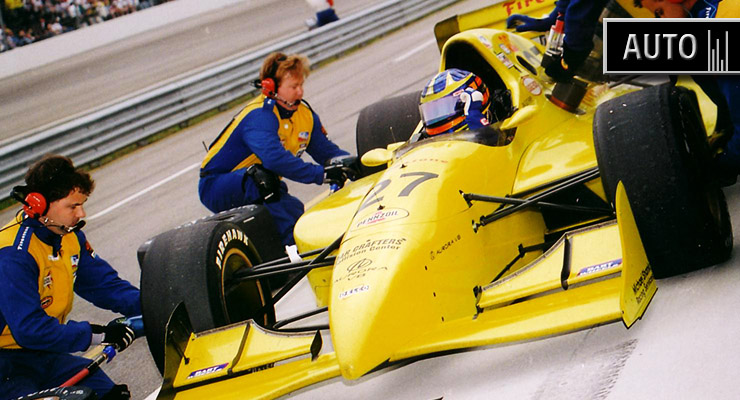 The vast automotive industry in Albuquerque reflects the city’s history of professional racing. Visit the Car Crafters off Montaño and you will see an example of high quality workmanship similar to that of a racing garage crew.

Behind the workstations of engineers, technicians and mechanics is business owner Jim Guthrie, a man with a strong passion for racing that led him to compete as a professional racer. Locally, his contributions to the sport and the automotive industry have been tremendous.

Guthrie developed a passion for the sport at an early age. In fact, it is hard for him to remember a time when he was not competing. Guthrie says playing with Hot Wheels and Matchbox toys was his foundation in racing. At age 5 he had a slot car and would carry it around his neighborhood to race on local yard tracks. At the age of 12 Guthrie began racing motorcycles and discovered that he could not stay off of two wheels. Guthrie says, “I remember racing my motorcycle when Tramway and Montgomery were dirt roads!” Later, he ran within the top ten in the New Mexico Trials Association and purchased the first Kawasaki GPZ550 in the state to race professionally. When the time came for Guthrie to buy a race car, he found a Formula Ford. He left the parking lot of the hotel where he bought it and took it directly to the racetrack. Guthrie admits this was a mistake; but he did it. With U-Haul packing foam as a driver seat and a giant S on his chest that “made him invisible,” Guthrie was officially on the scene. Often, he would be up until 4 in the morning doing engine work, but that was what he had to do. The experience of racing against drivers who carried race cars in 18 wheelers with 3-4 mechanics working on their crew was very intimidating. Guthrie only had one or two buddies working with him; with the race-car on a flatbed trailer attached to his pickup truck.

As the formation of the Indy Racing League approached it was time for Guthrie to purchase a newer, faster car. However, before this was possible Guthrie had to qualify for a spot in the series—a $50,000 investment for a shot at the top. He began selling himself relentlessly as a Cinderella story to friends, family and drivers and was able to raise the money. Then at the Pueblo Motorsports Track, a place familiar to Guthrie, he ran time trials and broke a track record; he was hired on the spot.

After taking out a loan against his house to buy a faster car, Guthrie found himself competing alongside Rick Mears, Tony Stewart and a local racing legend, Al Unser, Jr. When asked about his experience Guthrie says, “Indy was do or die. When I left the pit area my foot would be shaking because after high gear you never lift on the throttle. I would have to put my right foot on top of my left just to keep it down.” Guthrie remembers race day as pure magic as half a million people watched and jets flew over the cars lined up in the pits. “The flashes of memories are hard to process, I remember going into turn one and it would disappear because of the grandstands. It looked like a dead end at 232 MPH,” recalls Guthrie.

Guthrie finally had his shining moment in 1997 when he won at the Phoenix International Speedway, beating Tony Stewart by .854 of a second, with barely enough gas to finish the race. The win arrived at a perfect time as Guthrie was $185,000 in debt, barely making the race due to car expenditures. Guthrie recalls, “I had a car with no stickers on it that was built in my garage. I had to borrow a trailer to get it there. The win was surreal, and when I came home the president of Venture Capital Group called me offering almost a million dollars. I sent him a short contract, and later the amount was transferred into my bank account.” Guthrie credits the win to his pit team, a group with great chemistry just doing what they loved for fun. The team did not earn much money, and such an achievement with a low budget car would not be accomplished in the corporate dollars of professional The win proved timely, as next the next race was the Indianapolis 500. Before the race, Guthrie remembers being bombarded with media and cameras as he was now known for his big win in Phoenix. Guthrie, now a true ‘Cinderella story’, found himself in racing’s biggest event. Guthrie says, “At the Indy 500 some racers, such as myself, had to use the public restrooms. I changed into my racing gear while signing autographs!” Also, in describing the race Guthrie states, “There have only been about 750 drivers who have raced in the Indy 500 in its one hundred year history. This is an exclusive club I am honored to be a part of.” As the season closed Guthrie was presented with the Indy Racing League’s rookie of the year award, the top honor for young drivers on the circuit.

As time progressed Guthrie turned his focus on the racing scene in Albuquerque. He managed Sandia Speedway and helped build the dirt track and completed many renovations that are present today. Guthrie hardly ever says no to local drivers. Dan Brockett (who was featured in the last issue) is one racer who credits Guthrie for having an impact on his career by building a race car for the team and helping in sponsorships. Brockett even took Guthrie on a ride that inspired him to begin drifting professionally, prompting him to buy a Mazda V8 RX7. When asked about what it means to be a representative to the racing culture in Albuquerque, Guthrie says, “It is a big responsibility, but I dig it. I have always enjoyed teaching and being a coach, so to be able to give back to young racers is really cool.”