You are here: Home / Magazine / Kyle Martin and The Atomic West They say you never forget your first and Abq-Live won’t soon forget our first country music feature, Kyle Martin. Dust off your cowboy boots and let Kyle tell you about his musical influences, songwriting and love life.

What does it mean to be ABQ-Live the Magazine’s first country music feature?

I am truly honored. The fact that ABQ-Live would consider me, it means a lot both as an artist and a fan of the magazine. There are a lot of very worthy candidates in the country music field living and playing in New Mexico today. I couldn’t be more excited that you picked me!

I know that you have spent some time in other places, what keeps bringing you back to New Mexico?

That’s simple, New Mexico is ‘home’ to me. I’ve traveled around the U.S quite a bit. I’ve gotten to do some very cool things and see a lot of amazing places. However, I’ve never been anywhere that I wanted to live more than New Mexico. I grew up on a big ranch in Socorro, NM. My father’s family has been in New Mexico for well over 100 years. It just feels right. I love the land, the weather, the people, the culture…it’s truly ‘Enchanting’.

You mentioned some of the people who have influenced you, and I thought they were very diverse. Can you list them again, and maybe mention some things about a few of them?

This is always tough because I was moved by so many artists. My earliest influences, I’m talkin’ 4 or 5 years old, were Chuck Berry, Jerry Lee Lewis, and Marty Robbins. Jerry Lee especially, his energy was so intense…it jumped out of the speakers. Just a couple years later, my mom introduced me to some of my biggest influences of all time. I remember riding in her white single cab GMC pickup truck with her and my sister, headed to school (1st grade…maybe 2nd) listening to ‘Diver Down’ by Van Halen. WOW! I’ve never gotten over the raw, unbridled power that those guys cranked out with their music. She also had ‘Fandango’ by ZZ Top, ‘Physical Graffiti ‘by Led Zeppelin. That stuff made me feel alive! Then, when I was about 10 or so, I began playing the guitar. My dad realized I was taking a real interest in it and I started sitting in with his band when I was about 12. I started playing with him full time when I was 13 years old, and that’s when the Country music lesson really started. Ray Price, Merle Haggard, Buck Owens, Faron Young, Wynn Stewart, Willie…Waylon! We also did a lot of newer stuff (at that time); George Strait, Brooks & Dunn. Somewhere in there…I found Dwight Yoakam. Everything he did, I loved. I could’ve been in a Dwight Yoakam cover band and be just fine. His ‘Honky-tonk/Bakersfield’ sound was and is my definition of “Country & Western” music. Some other big ones through the years include; Queen, Marty Stuart, AC/DC, Prince, The Kentucky Headhunters…and too many more to mention!

If you could put together an all-star band to perform with, with members from any era, who would they be?

Drums, bass, lead guitar, etc. Oh man! Ok, on Guitar, Mr. Billy Gibbons from ZZ Top ‘cause he’s got all the styles covered (I met him once in Vegas..I almost cried!). On Bass, Mr. Berry Oakley, The Allman Brothers original Bass player…Friggin’ phenomenal! On Drums…Mr. John Bonham from Led Zeppelin because…IT’S JOHN BONHAM! Maybe we could get Prince in there too cause he can play & sing anything and is just a total badass!

I have watched you perform as a solo acoustic act and with a full band. What do you like about each?

The solo act is fun because you can turn on a dime and do anything you want in a heartbeat. There’s no one to turn to and say, “Hey, let’s do whatever…”. It’s also usually in very intimate settings, so sometimes you can make a connection with people that you may not make in a bigger venue. That said, playing with a full band is where it’s at. Having a bass & drums behind you is like the difference between riding a bicycle and popping a wheelie on a Harley…there’s no, comparison.

What has been your most memorable performance?

I’ve played in New York, Las Vegas, Oklahoma City, Memphis, Nashville…and all those were AMAZING, but…one night I stopped by the Range Café in Bernalillo, New Mexico to drop off a poster and the owner’s band was playing. He asked me if I’d get up and do a couple songs. I said “sure.”. We did a few old R & B classics and it was really groovin’. I closed with an old Willie Dixon blues number called ‘Hoochie Coochie Man’ and the people went, TOTALLY CRAZY! I’ve never seen a crowd go that nuts in a small venue like that before or since…it was really cool!

Have you ventured into songwriting?

Oh absolutely, since I was in high school. I write all the time. As a matter of fact, every song on my upcoming LP was written by me completely. A few of the songs are tunes I wrote years ago, a few are brand new. Songwriting is a strange process. No two songwriters do it the same way. I tend to write lyrics to music that I can already hear in my head. I’ll crank out rough drafts pretty quick, but I may tweak them for years . . .

I saw you have written a few different love songs, does that mean you are off the market?

No, I’m single. My love tunes aren’t generally ‘oh baby, I love you’. I’m more of a ‘night time is the right time’ kind of songwriter when it comes to “love” songs.

Was your song “I wanna be your man” written about anyone in particular? Did you ever get a chance with her?

I wrote ‘I wanna be your man’ over the course of a few days. The lyrics came fast and were just fun to me. The groove really facilitated my guitar playing too. I just envisioned some stacked fine broad cruisin’ through the bar and every guy just blows a fuse. No one in particular, I know some girls who’d fit the part nicely though!

What advice would you give to women waiting for “the right man”?

You have a new album coming out very soon, what can you tell us about it? How was the process, is it being produced locally, and when can we get our hands on it?

Finally! What an undertaking. If you have never recorded, it’s hard to tell someone all that goes into it. We started recording this album a little over a year ago at Elephonic Studios right here in Albuquerque. Mr. Jesse Korman is phenomenal and his insight has been invaluable on this project. One of the reasons it has taken so long is that I wrote, produced and performed every song on the album. I played every instrument other than the drums (thank you Mr. Eddie Garcia). I wanted this to be a vehicle that would enable me to truly showcase my music in every capacity. I also just wanted to be able to bring to life something that was almost completely my artistic vision (thank you Mr. Wes Naman). We’ve completely wrapped all recording and the release date for ‘The Atomic West’ by Kyle Martin is set, tentatively, for early May.

Where is the best place for fans to find your music?

It will be available from all the major online music retailers (i.e iTunes, Amazon, etc). You can also go to my website, www.kylemartinmusic.com, (thank you 11 Online for creating my website) which will have links to all of them, as well as everything you could ever want to know about me…well, almost everything. 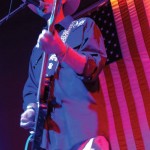 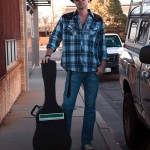 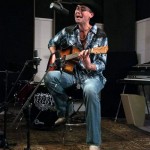