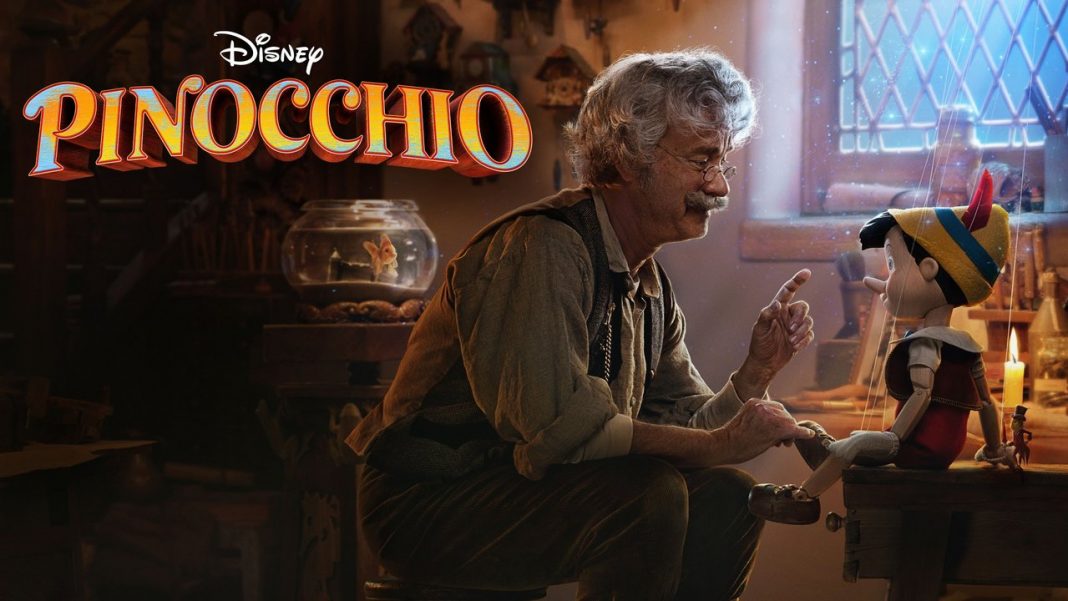 Disney’s 2022 live-action film Pinocchio snuck under the radar of people everywhere as it eked its way into Disney+, avoiding a large theatrical release and the ire of many who have come to automatically detest the live-action remakes as a rule of thumb. Despite having largely known actor Tom Hanks playing a central role in the film, Disney did the bare minimum to market this movie which is a shame because if I’m letting my conscience be my guide, I have to be honest and admit, I liked it. Now, if we’re being strictly honest here, I will have to start by admitting that I have never been a fan of Disney’s 1940s animated Pinocchio. As a child, I found the film to be painfully dull, and unlike other Disney movies I didn’t appreciate as a child but enjoyed as an adult, I have found myself, over the years finding myself even more bored by the old film than I did as a small child. That said, I suppose I decided to watch the 2022 live-action remake out of curiosity more than anything. I wondered if perhaps I would find myself drawn more to the film if live actors took the place of their animated counterparts. I even wondered if the movie would be so awful that it might make me appreciate the original by seeing it in a new light. Despite my musings, I came to an entirely different conclusion by the film’s end. I had to admit I genuinely enjoyed the movie.

After I finished the film, I began noticing many reviewers I followed treating the movie as another flop, and I found myself stunned by their reasonings. That, perhaps more than anything else, is why I am writing this review. Because I believe that many haven’t given this film a fair shake, I am eager to write about what I thought did work about this film and how I feel this all tied together to form an exciting take on an old 1940s classic.

Disney’s 2022 Pinocchio starts quite similar to its classic animated counterpart, with the exception being that it dives into a slightly more heart-wrenching backstory regarding Geppetto (Tom Hanks), hinting that the old toy maker is now an old man that has remained in his shop tinkering for years after the loss of his wife and son. Like its animated counterpart, the 2022 film introduces the Blue Fairy early on as she brings the wooden puppet to life, partially granting Geppetto’s wish to have a son. From there, the film follows pretty closely to the 1940’s film, with the exception of one huge thing that honestly drew me in, a change of perception.

In the 1940’s film, Pinocchio embarks on a journey to prove himself worthy of being a “real boy” by facing temptation and an array of other things. In the animated film, the journey is Pinocchio’s, and the villains and obstacles he faces help lead him to be a better person. In this film, Pinocchio is portrayed as almost an innocently naive individual that when faced with reality, finds himself easily manipulated as he strives to become something he believes will make his father happy. Rather than your typical hero seeking to be a better person, we are given an individual who has a good heart and must maintain that good heart despite having terrible things thrown at him.

This change of character for our protagonist suddenly transforms everything in the story, and in my opinion, it does so for the better.

One of my favorite scenes in the movie has been criticized by film critics everywhere who focus on the fact that the live-action remake doesn’t have the children in Pleasure Island drinking beer and smoking cigars but instead portrays the place as a theme park with children having fun. I disagree with the criticisms because I think the film improves on something the animated lacks.

In the 1940’s movie, bad children were smoking cigars and drinking beer while trying to convince Pinocchio to do the same. Our protagonist gives in and starts transforming into a donkey like many of them. The problem with that portrayal is as a child, I never identified with the bad children. They were so exaggeratedly bad the lesson went right over my head. As a nine-year-old, I told myself I wouldn’t do something as ridiculous as smoking and drinking as a child. The bad children in the 1940s film were so cartoonishly bad they felt as unreal as any Disney villain.

In this film? We are first introduced to Pleasure Island as a theme park; a cheery song plays while we see children enjoying carnival rides and root beer. It seems like a fun place that any child would love. As the passage continues, we see the children start devolving, slowly doing more violent things as they are given free rein to do whatever they like. This includes the children gathering to smash clocks with glee as Pinocchio, reminded of the clocks from his home, slowly starts edging away in his seat, looking scared as he finds himself disturbed by the scene but too scared to say anything. Rather than a cartoonishly “bad kid” convincing Pinocchio to do bad things, we see the puppet peer pressured into joining the other children. Staying away from the activities he won’t let himself do but giving into other activities as he’s too scared to tell them no.

This is a realistic version of peer pressure, a realistic portrayal of how a child might do something bad even if they know it’s wrong. Showing the children enjoying themselves and making Pleasure Island fun, in the beginning, was a genius move as it showed children (and even adults) how easy it is to go down the wrong road. What starts as fun can quickly become dark, and no child is too “good” not to be pulled in.

Small details like this are sprinkled throughout the film, and the film ends in a way that is different from the original but can be left up to interpretation by the viewer. This different ending bothered some but didn’t bother me in the slightest. After all, why should it end the same? It had an entirely different message than the original. The 1940s film showed a hero becoming a better person through tribulations, while this film showed its hero remaining a good person despite the tribulations he faced. In a world that so often tries to bury what is good, I found the second message more appealing, we can’t always change the world, but we can control how much the world changes us.

No matter what the world threw at him, the 2022 Pinocchio always loved his father and tried his best no matter the circumstances. Was he naïve sometimes? Of course, we all are sometimes. Did he do stupid things at times? Absolutely. But at the film’s end, I found myself cheering the little puppet on as I admired this character, never letting others change him, even when thrown into a world dead set against him.

Interested in more reviews? Check out our last movie here –> Doctor Strange in the Multiverse of Madness – Movie Review