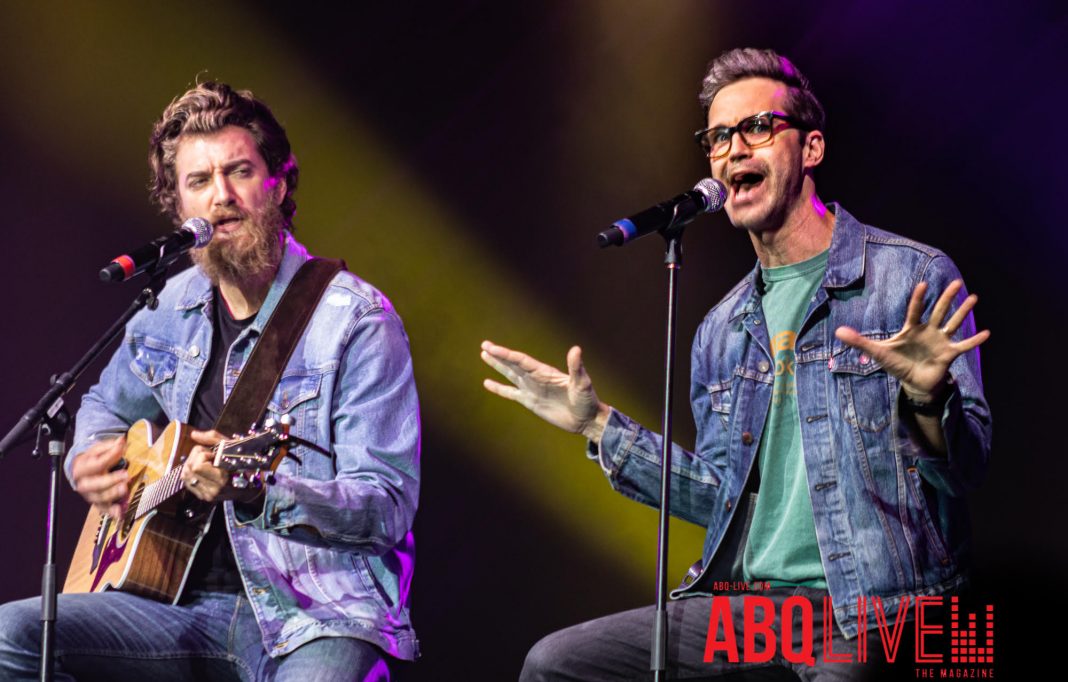 The dynamic comedy duo found their start as the creators and hosts of Good Mythical Morning, a popular YouTube series, before expanding and taking on other notable projects; including giving a home to the popular YouTube channel Smosh. The day after their performance in Albuquerque the comedians reached another milestone with the channel that started it all: Good Mythical Morning reached 16 million subscribers.

The duo’s performance was opened by Neal’s cousin Britton Buchanan and runner-up of season 14 of the American talent competition The Voice. He performed an active and energetic musical segment before McLaughlin and Neal took to the stage.

Once the two arrived on the stage the crowd cheered as they jumped into a popular song regarding the fragility of internet fame, even cracking jokes at their own expense.

At the beginning of their performance, the two comedians introduced a plethora of new material covering Albuquerque, or rather “Albuquirky” as the duo referred to the Duke City.

“There should be a t-shirt,” said Neal, with McLaughlin quickly agreeing stating the shirt should say, “Keep it Albuquirky.”

It wasn’t long before the crowd’s laughter could be heard filling the auditorium as both McLaughlin and Neal launched into some of their experiences with Albuquerque, including a photo with one of Albuquerque’s statues.

With the stage set after introductions McLaughlin and Neal began with familiar songs such as the “Nilla Wafer Top Hat Time Song” and “It’s My Belly Button,” performing them with several different props.

Throughout the performance, both comedians engaged with a highly energetic crowd, even bringing a member of the audience on stage after scouring the crowd for an individual named Kyle.

The audience responded enthusiastically to the engagement with the chosen audience member proving his authenticity as a man named Kyle by referring to his Monster Drink hat as the only proof he needed, earning an unexpected chuckle from the comedians themselves.

The night’s performance reflected the popular duo’s roots from their YouTube channel well ranging from over-the-top to silly, as well as dabbling in adult and childish humor alike.

As the end of their performance neared the two ended the night by thanking the crowd and reiterating what they love about live performances as opposed to their online YouTube presence.

“There is sort of a different level of mythicality that we are able to experience when we are in the same physical space with a bunch of mythical beasts,” McLaughlin said. “The internet is awesome and we wouldn’t be here without that but there is just something about being together as a family and as a herd. We’re just humbled by you guys supporting us and the stupid things that we try. From eating testicles to writing novels.”

The crowd responded with cheers to McLaughlin; members of the crowd screaming their love for the duo. Neal followed up from his comedy partner’s words expressing his appreciation for all of their fan base.

“We’re a part of your lives and it’s really an honor to hear that when life throws difficult circumstances and trials your way — we’re floored to hear that we’re part of your strength that helps to give you laughs and bring you through things,” Neal said. “We’re humbled by that. We always tell you to be your mythical best but we do want you to know that you inspire us to be our mythical best.”
To learn more about the comedy duo Rhett and Link you can check them out on the YouTube channel that started it all: Good Mythical Morning or find them on Facebook or Instagram.