*Minor Spoilers for season three of The Umbrella Academy

The Hargreeves siblings are back in season three of The Umbrella Academy, transforming the way we see the superhero genre season by season.

The Umbrella Academy has always been a show with its own distinct flavor by ignoring multiple superhero tropes and allowing its main cast to not only embrace being human but also explore how the superhero life would impact an individual’s mental state in real life. This, combined with the tongue-in-cheek humor, a charming cast, and lack of dime-store supervillains, makes for an exciting, hilarious, and sometimes unexpectedly emotional ride. Season three of The Umbrella Academy continues the exciting ride without losing momentum, with the new season dropping on Netflix on June 22, just before the end of Pride Month. Why is this important? Because just as The Umbrella Academy routinely ignores standard superhero tropes, The Umbrella Academy also ignores the trope from many other popular superhero franchises of either leaving out a superhero or villain’s sexuality if it is anything but hetereosexual or releasing only the slightest hints of LBGTQ+ in their franchise and The Umbrella Academy has not only in the past embraced its LBGTQ+ characters but also shined a spotlight on them.

Unfortunately, it is impossible not to dive into a review for this season of The Umbrella Academy without discussing unavoidable spoilers.

Minor spoilers for season three of The Umbrella Academy begin here. You have been warned.

Season three of The Umbrella Academy starts with our titular cast of the Hargreeves siblings being flung into an unknown timeline facing not alternate versions of themselves but instead finding that the home they thought they knew had been rebranded into The Sparrow Academy housing different siblings with only one face among the new siblings being familiar. After honestly the best hallucinogenic dance scene ever placed in a Netflix series, the siblings are driven from their former childhood home and are at a loss of their place in the new and very different world. From there, we get to see each of the siblings begin different journeys of discovery, some of them heartwarming such as Diego becoming a dad, and others horrifying, such as Allison slowly losing a grip on her morality when she realizes she is in fact in a world where her daughter doesn’t exist.

Of all seven siblings, however, the one whose journey is handled with remarkable attention to detail is the journey of Viktor Hargreeves. Viktor has always been in the shadow of his siblings, and it was only at the end of season 2 that we see Viktor begins to find himself. The journey is brought to a full circle as Viktor transitions to male and introduces himself officially onscreen as Viktor. We get to see every one of his siblings’ reactions, which remain supportive and loving in their own ways.

My favorite part occurred in episode 3, where Luther brings up Viktor in a conversation with Diego. Luther calls him ‘Vanya,’ but Diego, without missing a beat, corrects him on his mistake and tells him of Viktor’s transition. This all leads up to one of my favorite scenes. Where we see Luther and Diego muttering with each other, and Viktor comes upon his two brothers.

Viktor looks down and then up with a huge joyful grin we never saw on his character before answering, “Yeah, I do,” to which Diego responds with a nod and, with a gruff voice, says, “Good. You are.”

It’s simple, heartfelt, and points out one of my favorite aspects of the entire show, the interaction between siblings. While all seven of the Hargreeves siblings share collective trauma, they also share a deep bond as family members. While we see multiple moments of their love for each other, we also see an equal amount of moments of them bickering, fighting, crossing the line with each other, and forgiving each other. All of these are very real and very honest interactions that siblings all over the world deal with. The moment the Hargreeves siblings accept Vikor isn’t just heartwarming on screen; it’s heartwarming off as well because of the genuine love that transgender actor Elliot Page was met with by his fellow cast, writers, and The Umbrella Academy creator Gerard Way who not only accepted Page but embraced the idea of Page’s character also coming out as transgender. Knowing the love, they felt behind the screen only makes Luther’s eager grin even brighter.

By humanizing its characters, The Umbrella Academy doesn’t need to bring a dime-store villain of the week for them to band together to fight against. In fact, almost unwittingly, the antagonist of previous seasons has been one of them, and any true villains that thread throughout the series are often individuals who can be just as self-serving as individuals we know in real life.

While many other franchises strive for realism by pushing the dark and gritty combined with a romantic interest who only serves to act supportive The Umbrella Academy manages to outshine larger franchises by allowing its characters to not only have relationships outside of romance but have those relationships take center stage. The Hargreeves siblings are truly the heart of the show and their interactions reflect the best and worst part of being a sibling while highlighting the different walks of life one can choose while coming from the same home.

The Umbrella Academy stands out among the rest by being fun, exciting, and well-written, allowing its cast to represent humanity as a whole pettiness and all, highlighting the highs and lows of being a sibling and not hiding its LBGTQ+ characters but having them take center stage along the rest.

Do you love film reviews? Check out our latest review of Doctor Strange in the Multiverse of Madness here! Diego Martinez - August 16, 2022 0
The Library has become the go to spot on Wednesday night for latin music, as we take you there for Salsa Wednesday! Wednesday Nights are...

Diego Martinez - August 16, 2022 0
One and all gathered at InsideOut to remember an Albuquerque legend, DJ OHM Friends and family from all around the city gathered together downtown at...

Diego Martinez - August 11, 2022 0
A trio of Albuquerque Summerfests bring the community together for an all age event; this time with the Downtown Summerfest on August 6th, 2022. The...

Join NM United at Isotopes Park as they take on Sacramento FC 7:00pm

It's that time of the month again! Art Walk will take over downtown once again for an evening full of vendors, music, and art! 5:00pm-9:00pm All age event

Join Mr. Afterhours as he brings Chicago house legend, Gene Farris, to ABQ for the latest installment of We House Fridays at Effex Nightclub. 9:00pm-2:00am 21+

Join Viva ABQ and Electric Playhouse as they host Blankface for a night full of dubstep! 9:30pm-2:00am 18+ Event

Head to the Civic Plaza Downtown for a free event that features food, music, and entertainment! 5:00pm-10:00pm All age event

Join NM United as they take on Miami FC at Isotopes Park 7:00pm 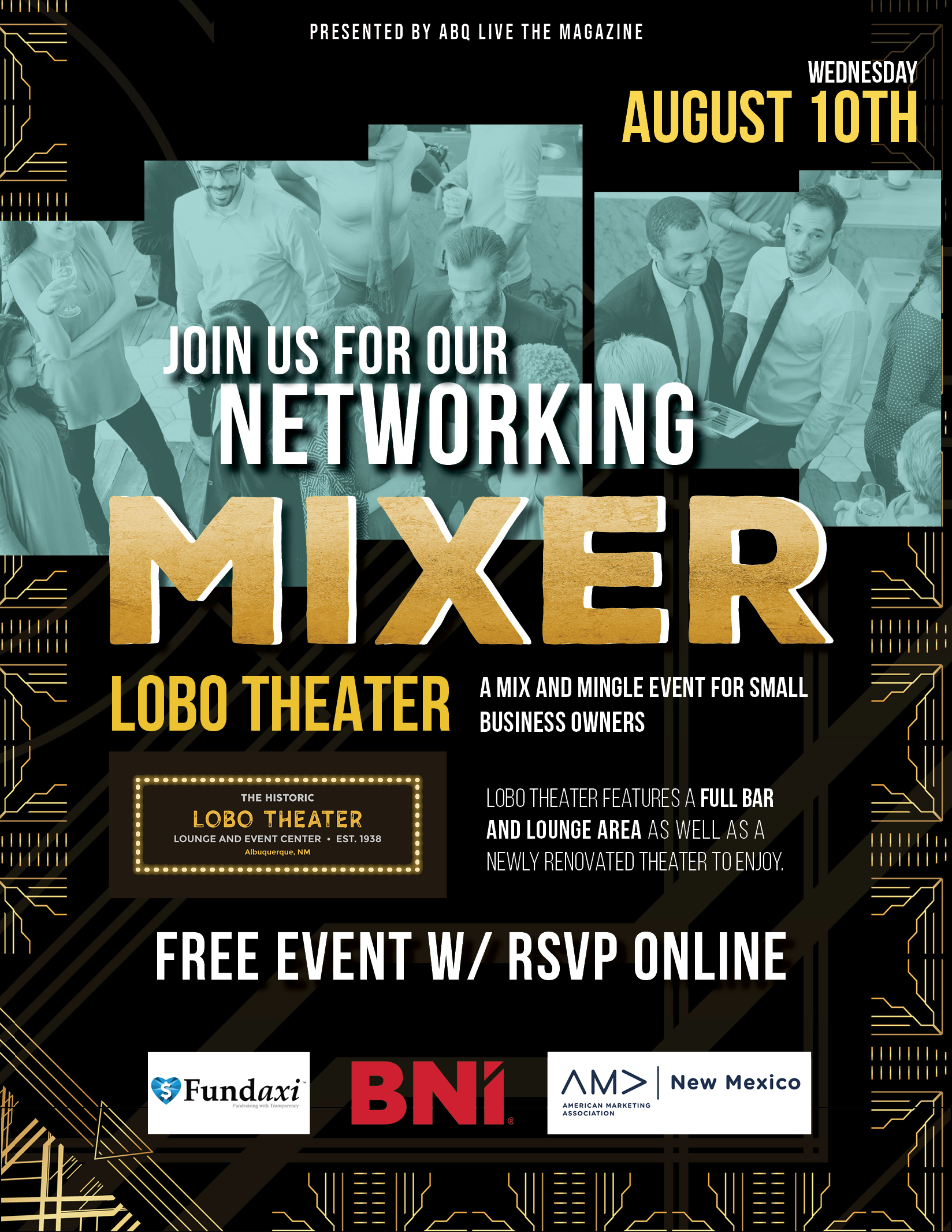 Ready to connect to local businesses in your area? The Summer Networking Mixer is where you meet people who matter and move your business forward now! Join ABQ-Live in conjunction with […] 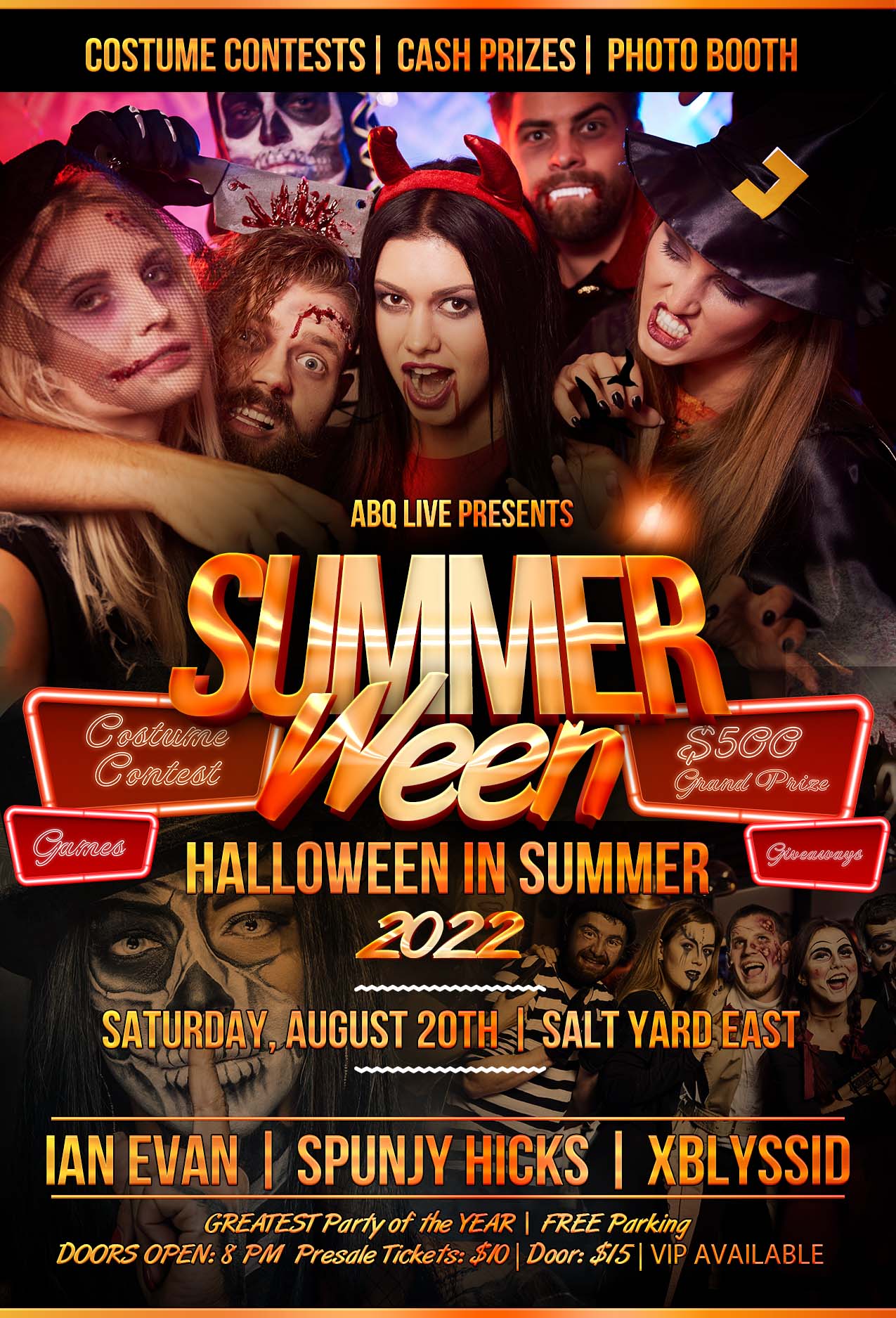