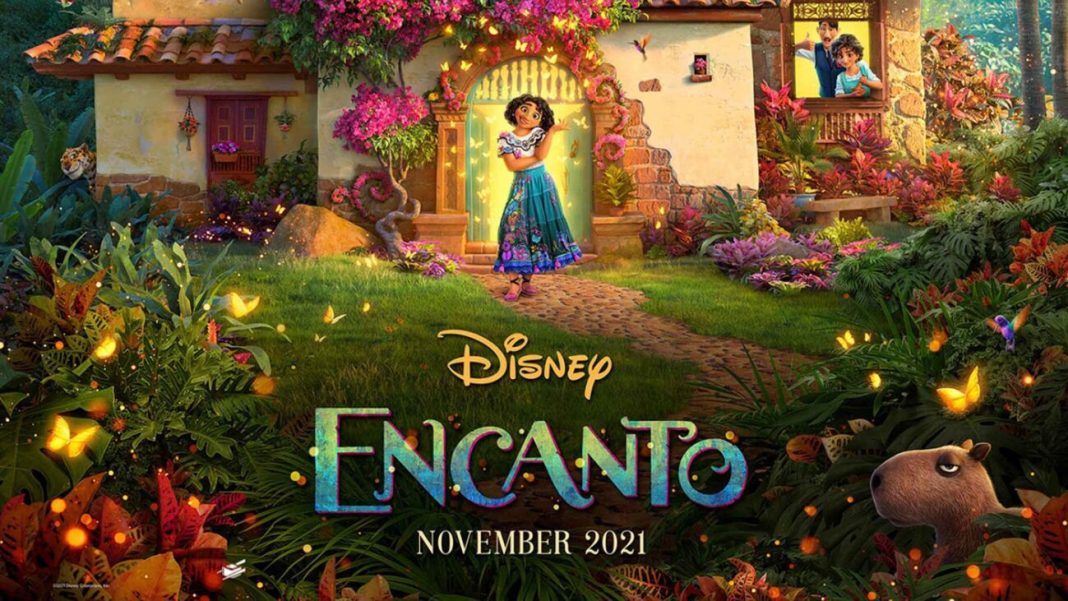 How far would you go to save a family that doesn’t believe you can save it? This is a question that the main character of Disney’s latest animated film Encanto explores as the youngest girl and only ungifted child in the family Madrigal, Mirabel, searches relentlessly for a way to save her family.

Mirabel is met with countless obstacles, including multiple confrontations with the head of the family Abuela Alma Madrigal (affectionately referred to as just Abuela), who continues to deny that any danger to the family exists at all. Despite this, our heroine continues forward, determined to save her family and home.

What is the best word to describe this film with a straightforward plot and charming main character?

Brilliant. From the characters to the music to the final resolution, Disney’s Encanto can only be described as brilliant.

Set in early 20th-century Colombia, the film goes out of its way to explore Colombian culture while focusing on making each character relatable to anyone watching the movie. Even if you can’t understand each inner crisis each member of the house of Madrigal experiences, chances are you know someone who does.

This all starts with our main character Mirabel. Despite being the only ungifted child in a house filled with other family members brimming with creative and unique superpowers, Mirabel never once comes across as bitter towards any of her family members. Despite this, the film doesn’t go the extreme other direction either of making Mirbel angelically perfect as she expresses both envy and despair in her heartbreaking number “Waiting On A Miracle,” where she tries to convince herself she’s okay being the lone powerless member-only to break down as she admits to herself she’s not. Mirbel’s inner look into her desperate situation isn’t the only time the movie takes a moment to explore the inner workings and complications of being human as it highlights both of Mirbel’s older sisters, Luisa and Isabella, in their respective musical numbers. Luisa’s talent is by far the most useful with her super-strength. However, because of its usefulness, she finds herself struggling under the figurative and often literal weight of her family’s and the village’s demands to carry all the responsibility thrown onto her. Her song “Surface Pressure” is one that any oldest child of a family will easily relate to with her lyrics:

Was Hercules ever like, “Yo, I don’t wanna fight Cerberus”?

I’m pretty sure I’m worthless if I can’t be of service.”

The last note is remarkably striking as it reflects the ugliest thoughts we keep to ourselves regarding self-worth and responsibility. In parallel, while I didn’t connect to it as strongly, Isabella’s number “What Else Can I Do?” is easily just as impactful to the movie as it explores the mind of a middle child who is seen to be perfect and has little choice but to continue to reflect others ideas of perfection all while struggling to keep her desires buried.

Encanto doesn’t shy from tackling dark issues in its dialogue when not in a musical number either. The character of Bruno, the missing uncle who supposedly ran from his family, is probably the movie’s most pure character as he talks with his niece regarding his decision to hide from his family when he realized his powers (the power to see the future, which often predicts bad situations) were causing other distress.

“My gift wasn’t helping the family…but I love my family,” Bruno tells Mirabel as he justifies subjecting himself to a lonely lifestyle to spare others’ grief.

These small examples, from the lyrics to the song to the characters’ dialogue, really make Encanto special. Movies generally shy away from hearing main characters tackle their inner issues or at the very least only let one main character tackle these issues. In Encanto, we don’t see just one, but multiple characters tackle their inner issues while still connecting to what often drives these issues or gives life to them – love for their family.

That isn’t to say the music, comedy, or Encanto’s animation aren’t also brilliant. They are. But what drew me was that the movie stepped forward and tackled what it means to be in a loving family. Sometimes that love can cause you to be filled with self-doubt or even weigh you down with pressure no one asked you to take on. Happily ever after doesn’t mean everything will be perfect and no good family is.

I won’t spoil the conclusion or what is responsible for the danger to Mirabel’s family’s magic. Still, I will tell you that Encanto will leave you enchanted from beginning to end while making you confront actual issues we all struggle with in a way that shows that you are not alone in this world.

If this movie isn’t an instant Disney Classic, I have no idea what else could possibly be.

Those interested in watching Encanto can find the movie on Disney +

Want to check out more movie reviews? Check out our last review Cruella 2021 Review: Brilliant but Neither Bad or Mad! Nichole Harwood - May 7, 2022 0
By Nichole Harwood  *Minor Spoilers for Avenger's Infinity War, WandaVision, and Avenger's Civil War Marvel's latest edition to the roster, Doctor Strange in the Multiverse of...

Nichole Harwood - May 6, 2022 0
By Dan Silvius When I first started enjoying M’tucci’s, I fell in love with the concept. “We not only serve great food, but we take...

A Beautiful Looking and Sounding Mess: Doctor Strange in the Multiverse...

Kick off the last Saturday of the month with a mountain of delicious food paired with your favorite beers from Rio Bravo Brewing Company at our 2022 Crawfish Boil! Live […]

It's that time of the season again where we get to spend Sunday mornings at the market again! The Rail Yards Market makes its return Sunday May 1st! 10AM-2PM

The All Sick Drag Brunch returns to Central 505 for a single show! Enjoy mimosas and a show for Sunday Funday! 12PM-3PM

It's time for the ABQ Art Walk again! This time around there will be new art openings, small markets, and live music performances! Downtown ABQ 5PM-9PM

The Salt Yard West is teaming up with Marcos Jay Events to bring you a Drag Race Extravaganza featuring Willow Pill from this season of RuPaul’s Drag Race! Doors open […]

Volac will be playing live at Electric Playhouse on Saturday May 7th. Support from BURN THE DISCO & Insomniak 21+ event

Feeling spooky this Friday the 13th? Get down at the Power Plant with local DJs that will bring hip hop, groove, funk, house, Afro-beat vibes, & much more at the […]

Mr. Afterhours presents another round of We House Fridays with Tara Brooks bringing the jams to Effex rooftop this Friday night! Support from Badcat & Swift Money. 9pm - 2am […]

This Friday the 13th head to Effex Nightclub for the I Love the 90's Music Video Dance Party. A night full of your favorite 90's music videos will be playing […]

SOMOS made it's very long anticipated return this year with Relentless Beats and Viva ABQ. This beautiful festival, Dream Glow, will capitalize on everything Albuquerque has to offer from art […]

SOMOS is capping off the 10 day event with a Reggae Fest presented by Mariposa Music. Get down with Reviva, The Riddims, Burque Sol, and Deecee’s Soul Shakedown for a […]

Bhaskar will be performing live at Effex Nightclub on Thursday May 19th. Support from Davy Jones & Uli One 9pm - 2am 21+ Event

Biscits will be performing life at Electric Playhouse on Friday May 20th, with support from local DJ Ana M! 10pm - 2am 21+ Event

Effex Nightclub will be hosting Midnight Tyrannosaurus on May 26th for the Plantet Doom World Tour! 9pm - 2am 21+ event

Anden will be performing life at Effex Nightclub on May 27th! 9pm - 2am 21+ event

The New Mexico Wine Festival finally made it's return! Enjoy and sample over 200 wines from New Mexico's finest wineries with live music! 21+ Event

Come enjoy the best blues music in the city along side the best brews in the city with the Blues and Brews Festival! The day is full of craft beer, […]